‘Dear Beethoven! You are going to Vienna to realise a long-desired wish: the genius of Mozart is still in mourning and weeps for the death of its disciple. In the inexhaustible Haydn it found refuge, but no employment; through him it seeks to be united with another being. By incessant application, receive Mozart’s spirit from Haydn’s hands.’

These were the words of Count Waldstein’s famous entry in Beethoven’s friendship book shortly before November 1792, when Beethoven left Bonn for Vienna, which ultimately became his permanent base until his death in 1827. For biographers of Beethoven, the relocation in 1792 more or less marked the composer's shift from youth to adulthood. The Piano Quartets, WoO 36, were composed in 1785 and clearly reflect their creator’s youth. Yet ‘Mozart’s spirit’ is still obviously evident even here. The Quartets actually constitute the first, most marked examples of Beethoven’s artistic leaning toward Mozart. On the other hand, the works also contain so many original elements that later, when Beethoven began to make a name for himself in Vienna, he readily took ideas and themes from WoO 36 and incorporated them in new works, such as his official Opus 2.

In time for the 250th anniversary of the composer’s birth in 2020, pianist Leonardo Miucci together with a quartet has recorded The Piano Quartets again – and on historical instruments for the first time ever.

The CD was released as early as November 2019 by the label Dynamic.

Official trailer for the CD 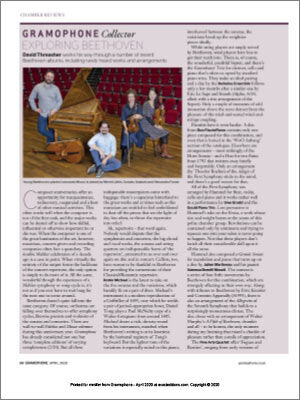 Selected mentions in the press